The Commission for the Preservation of the New Order

Directed from on high by the Emperor through his agent, the Grand Vizier, the Commission for the Preservation of the New Order (COMPNOR), is a massive, inclusive, civic organization dedicated to furthering the aims and influence of the New Order. COMPNOR's ideals are cherished by its adherents, and is an extremely selective organisation within the Empire, accepting only the most loyal, dedicated and capable of those in service to the Empire. Originally, COMPNOR was themed as a social gathering for young idealists within the budding New Order who saw a new regime as the ultimate solution to the chaotic, corroding, days of the Old Republic. As the Galactic Empire has grown, so too has this once modest society as it is introduced onto every new world of the Empire, quickly organizing and growing almost spontaneously into an activist party as the New Order phenomenon takes root wherever the Empire's rule extends. 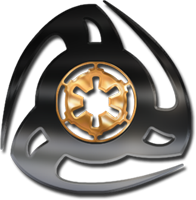 The mission of COMPNOR is to further the ideology and ethics of the New Order, maintain the political party's administration of the Galactic Empire's government, and protect the interests of the Empire and its citizenry through:

Administered by the Select Committee, COMPNOR actively works to ingrain the ethics and ideologies of the New Order into the lives and composition of the galactic citizenry. The Imperial way of life is defined and advanced within COMPNOR, spanning education, instruction, morality, civic responsibility, punishment and detention, evaluation, improvement, and progress. It falls to COMPNOR to lay the foundation that the future of the Empire is built upon, and to achieve these aims, COMPNOR is divided into a series of departments and portfolios that will change and evolve to meet the fluid demands of the New Order over time. At current, these departments of COMPNOR are the:

This is a branch for active and skilled members of the Empire who have shown dedication and loyalty to assist in the running of, review and expansion of the Empire in both an IC and OOC context.