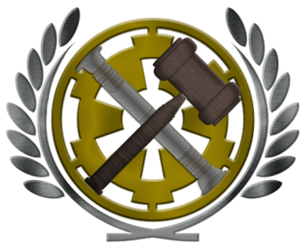 The Galactic Empire is the largest government of the galaxy, spanning thousands of light-years in a massive, unified governmental system that extends from the Deep Core to the Outer Rim. With such a vast Empire, the Emperor is unable to personally manage the day to day affairs of the hundreds of systems and dozens of sectors that make up the largest bastion of order in the galaxy.

To ensure proper management of the Empire, the Emperor delegates authority for the localized management of sectors, systems, and planets to a complex series of Imperial Governors that form a hierarchy to manage the application of Imperial law, development programs, and the safety of the Empire in a regional capacity; providing flexibility for the diverse and different needs that each planet and system presents. These governors, falling under the auspices of an Inner Circle member appointed as the High Moff, compose a civilian branch of the Empire known as Regional Government.

The mission of the Regional Government is to exercise planetary, system and sector management to ensure the safety, prosperity, and continued development of the Galactic Empire in-line with The Throne's directives. Regional Government seeks to achieve its mission through:

The Council of Moffs

With the vast array of systems falling under the banner of the Empire, it can be challenging for the Emperor to consult with all of the Governors on matters of day to day administration. Many of the issues confronting the Governors could be addressed collectively and through shared knowledge and experience. To this end, each Regional Governor is granted a seat within the Council of Moffs, which is a body established within Imperial High Command to ensure the Regional Governors share knowledge, expertise and can discuss issues that currently or will potentially affect Imperial territory.

As a component of the Council of Moffs, the Emperor appoints a High Moff who is tasked with overseeing the Council of Moffs and performing the duties of Chair of the Council. As the identified conduit of affairs for the Regional Government, the High Moff is a singular point of information and day to day administration of the Regional Government branch, and as the branch’s primary representative, is granted a seat in the Inner Circle.

As the Chair of the Council of Moffs, the High Moff seeks to ensure consistent approaches to administration and policy across Regional Government, and also holds authority over the Resource Allocations Division - Regional Government (RAD-RG). The High Moff does not have the authority to issue operational orders to Regional Government staff excepting emergency powers when a critical and time-sensitive matter has arisen and the Grand Moff or Moff is either unavailable or has been incapacitated. Chairman of the Council of Moffs

The Galactic Empire is divided into vast Regions; geographically huge portions of Imperial Territory which alone rival the expanse of most governments throughout the galaxy. Overseen in the Emperor's name by a Grand Moff, Regions enable for more concerted leadership at a strategic level by grouping two Oversectors into one overarching administrative region that enables the sharing of military, economic, and supporting resources across sectors and to where the highest strategic priority exists.

As a direct representative of The Throne, the Grand Moff is granted a large set of powers under Imperial federal law. Not only does the Regional Governor have operational command of the Region's military and security forces, they may also enact local laws and ordinances concerning their appointed territory by decree - as long as such laws do not contravene Imperial federal law. This gives the Grand Moff a high level of authority and control of their Region, and the ability to adapt the Region to the specific needs and challenges their territory is facing.